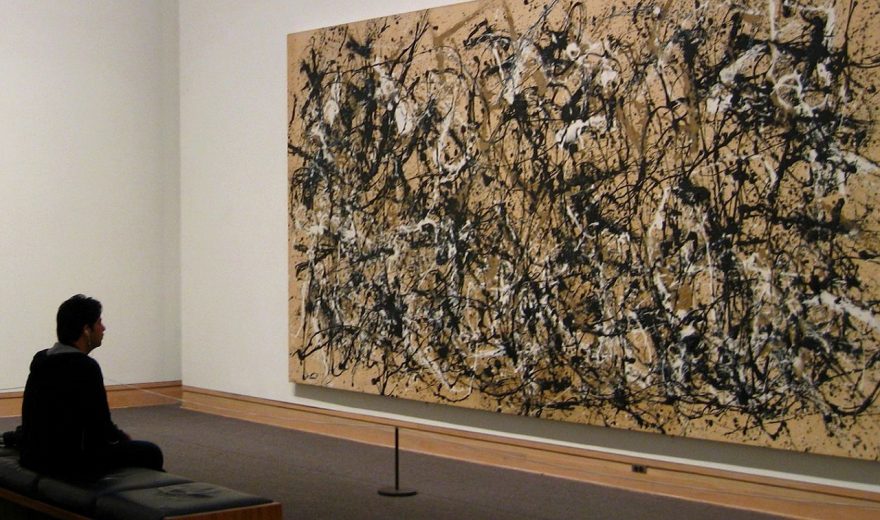 Jackson Pollock is the undisputed pioneer of the New York school of abstract expressionism. Throughout the 1950s he stunned audiences with his huge, mural-sized canvases, mottled with stripes and scratched with bold, expressive signs that seem to pulsate rhythmically on their surface. How the legendary artist created Autumn Rhythm, one of his most famous paintings, is discussed further in the article.

One of the most famous artists of all time, Jackson became world famous for his rhythmic, expressive paintings that dance with energy and life. Originally from New York City in the 1940s and 50s, his loose paintings embody the inventive spirit of American Abstract Expressionism.

A pioneer of action painting, he invented the “drip technique,” applying liquid paint in loose, linear threads across a surface to create intricate, web-like patterns of movement, earning him the nickname “Jack the Sprinkler” for it. In New York City, he lived with his two brothers in Greenwich Village and studied painting with local artist Thomas Hart Benton.

By 1936, the artist joined David Alfaro Siqueiros’ studio to study mural painting, acquiring the skills that enabled him to create outdoor paintings for the Public Works of Art project during the Great Depression.

With David, Jackson experimented with expressive and unconventional painting styles and materials, as well as huge scales that surpassed his later, expansive canvases.

Later, Jackson met and fell in love with the artist Lee Krasner, who introduced him to her artistic circle, including the influential artist Hans Hoffman, who later became a great supporter of Jackson’s work.

Pollock also met gallery owner Peggy Guggenheim and showed her his work; she was so fascinated that she invited him to participate in the Art of this Century exhibition at her New York gallery and had his first solo show in 1943.

Throughout his ascent to international fame, Jackson often faced harsh criticism. Art historian Robert Coates has been known to call his work “simply disorganized bursts of random energy and therefore meaningless.” Some of his fellow artists also resented the fame he achieved, driving a wedge between their friendships.

Facing these difficulties proved almost overwhelming for the artist, as his drinking problems resurfaced, while his marriage collapsed when he began to have extramarital affairs. Nevertheless, despite all his ups and downs, Jackson left behind a huge legacy that is still hugely popular today. The work “Autumn Rhythm” was no exception.

By the time Jackson painted the radical “Autumn Rhythm,” he had begun painting on large pieces of raw, unprimed canvas. In creating this masterpiece, the artist used a huge piece of canvas that he positioned on the floor of his studio. As he painted, he moved across this epic surface, working on it from all sides and even into the middle, thus departing from the traditional conventions of easel painting. It was this performative way of working that prompted art historian Harold Rosenberg to call Jackson and his colleagues “Artists of Action. As he worked on the floor, cigarette butts and trash got on the surface and mixed with the paint. And even though they were unconditionally removed after the canvas was stretched over the prepared frame, distinct traces remained in the final image.

Although the viewer can see many different layers of subtle colors in the painting, Jackson began Autumn Rhythm with a loose network of black lines, which formed the starting point for the construction of further marks. Some art historians believe that he originally sketched the abstract shapes of the three figures with a series of dipping black dots and then applied other colors to them. This suggests that Jackson’s art was always just a few steps away from the real world. From afar, “Autumn Rhythm” may seem muted and faded, but a closer look reveals a combination of colors, including black, white, beige and turquoise blue.

The chaotic application of paint

Jackson’s painting methods from the late forties were experimental, expressive and improvised. He snapped, poured, splattered, dripped, and even threw paint on the canvas on the floor, moving quickly across its surface as he worked. It was this surprising and unconventional approach that earned him the nickname “Jack the Dripper.”

In “Autumn Rhythm,” the end result is a rhythmic map of intricate lines that sweep and swirl through space, moving across the canvas in a way that reflects the patterns of nature that the painting’s title refers to. As in all of the artist’s later works, there was no central focus area here – instead, each surface of the canvas is treated equally.

Not surprisingly, the type of paint Jackson used was as unconventional as his other methods. “Autumn Rhythm” was painted with household enamel paint, a tacky, glossy material that is usually applied to patios, doors or radiators. Using this liquid type of paint (sometimes diluted) allowed the artist to create his signature loose calligraphy marks, which then dried with a hard sheen, as if they were separate from the raw canvas behind them.

Jackson used some rather unconventional painting tools when creating Autumn Rhythm and other similar works of art. He used sticks, spatulas and knives to create tangles of lines and colors, forming dense webs and nets that overlapped each other to create a sense of movement and space. Sometimes he would apply paint directly to the surface of the canvas with a spatula, or mix the paints together so that they would spread in puddles. When he did use brushes, he dipped them into the diluted paint and dripped from them, not letting the bristles touch the surface or leave any traces on the canvas. Instead, the paint would gather and solidify, in its own way embodying the spontaneous freedom of the Abstract Expressionist style.

Copyright © 2023 Abstract Possible is about our understanding of abstraction today.